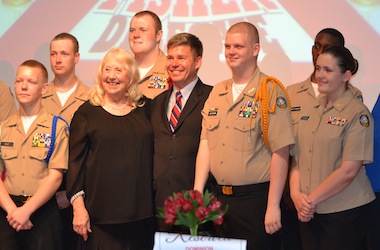 Mark Fisher is committed to ensuring that every generation of Marylander has the opportunity to pursue and realize the American Dream.  Mark was raised in Baltimore, Maryland to working class parents who taught him the value of hard work, sacrifice and persistence.  While raising three children in Calvert County, Mark and his wife Deena built a successful small business.  In 2010, Mark decided it was time to enter public service, and was elected to represent the great people of Calvert County in the Maryland General Assembly - and has done so proudly for nearly four years.

While serving Calvert County in Annapolis, Mark has been a tireless advocate for a smaller government that is actually responsive to its citizens; less spending; lower taxes; and fewer job-killing regulations.  Mark aggressively fought for common-sense policies that would provide Maryland businesses with the necessary tools to create the jobs Maryland workers need.
Mark stood firmly against the O’Malley-Brown budgets that continue to saddle current and future generations of Marylanders with mounting debt and diminished opportunity.  While the Governor and his colleagues have proposed tax increases on everything from gasoline to snack foods, Mark stood strong in opposition.  He believes that taxpayers should keep more of their hard earned money to meet the needs of their own families! If given the opportunity to serve again, Mark will not waiver from this commitment to advance policies that lower taxes; decrease government spending; and promote job creation.